Do you have Unforgettable Aussies in YOUR library?
Make better breeding decisions by truly understanding the influential sires and dams in your Aussie's pedigree.

Find out which desirable traits were passed down through many generations so you can capture them.

Don't make mistakes by repeating an influential sire or dam many times. Know where they are in your bloodlines.
You owe it to yourself and your future breeding success to own the valuable resources in these books! 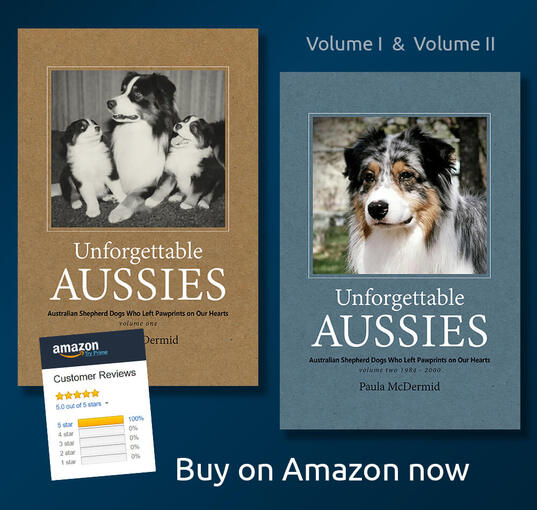 ​Stories, photos and knowledge not available anywhere else!
CLICK TO BUY NOW AT AMAZON USA
VOLUME I
200 pages with 427 color photos.
15 foundation Australian Shepherd sires and dams born between 1970 and 1984.

Unforgettable Aussies: Australian Shepherd Dogs Who Left Pawprints on Our Hearts celebrates the exceptional dogs who helped define the Australian Shepherd breed. In this rich history, influential Aussies are featured in their own chapter along with their descendants. Each dog in the book is pictured with a detailed profile including titles, special show wins, sire and dam, and name of the owner.

Also included are personal stories about many special Aussies, and pedigrees to help you research your dog's family tree. Never before have Aussie breeders and owners had access to this priceless information in one resource. Every page shows why Aussies are truly unforgettable. ​
VOLUME I FEATURES 15 FOUNDATION AUSSIES

Unforgettable Aussies: Australian Shepherds Who Left Pawprints on Our Hearts, Volume II.
Available at Amazon.
BUY NOW AT AMAZON.
CLICK TO BUY NOW AT AMAZON USA
BACK TO TOP
Site updated 01 January 2023
ALL CONTENT AND PHOTOS IN THIS BLOG ARE PROTECTED BY OFFICIAL COPYRIGHT FROM THE UNITED STATES COPYRIGHT OFFICE.
​Copyright 2023 © All Rights Reserved. Paula McDermid / Bainbridge Press. www.paula-mcdermid.com. Unauthorized use and/or duplication of material on this website is strictly prohibited without express and written permission from this site’s author/owner. Excerpts may be used, provided that full and clear credit is given to Paula McDermid and www.paula-mcdermid.com with a link to the original content.  PRIVACY POLICY