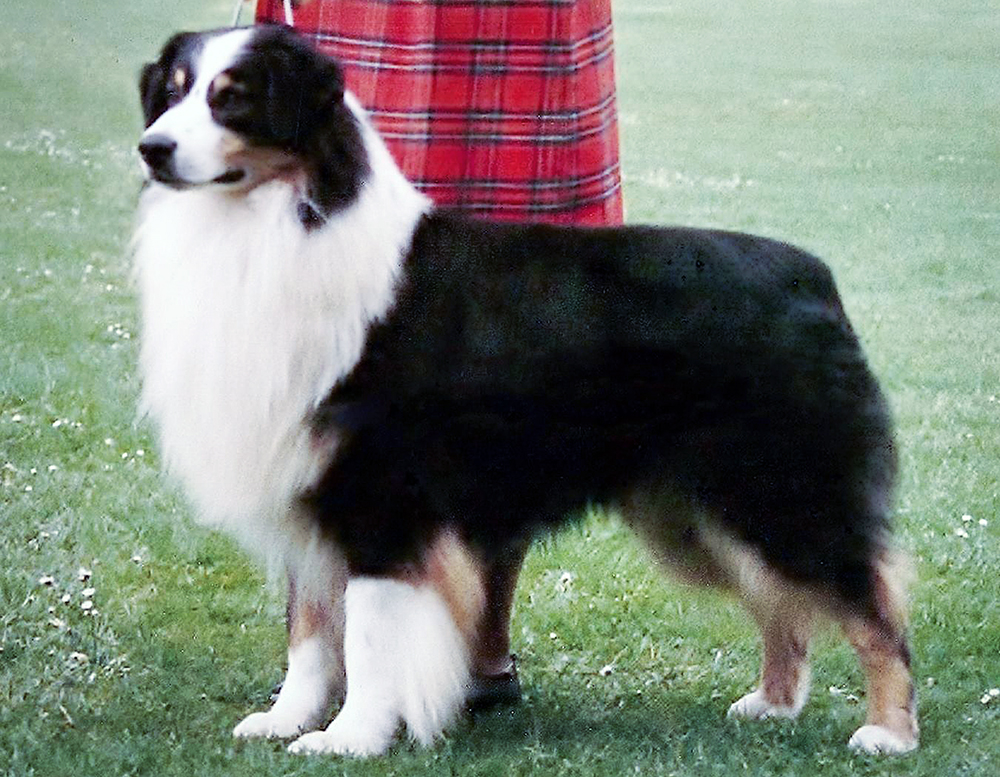 London was a flashy, handsome dog. He had effortless, floaty sidegait with a lot of reach and drive, and had an exceptionally well put-together front assembly. He had a lot of front and rear angulation at a time when many dogs had straight shoulders and stifles. His neck was long and graceful, flowing into a strong, level topline. London’s coat was exceptionally black and shiny, and he had beautiful, warm brown eyes.

London was an athletic dog who combined the best qualities of his sire and dam. His showy attitude and long sidegait came from his mother, and his bone, coat, and arch of neck came from his father. Both parents gave him shoulder layback and rear angulation.

London’s exceptional type, attitude and breathtaking movement carried him to Number 1 Aussie in the nation in 1988.
He loved everyone he met a was a wonderful ambassador of the breed. London also had a sense of humor and liked to play a little trick. When he lived with his breeder, London would open the kennel doors and let all the girls out, but he wouldn’t let out the boys. After he went to live with his new co-owner, she discovered his “game” and had to put clips on all the gate latches to keep him from letting her girls out!

London stamped excellence on his offspring. He added strong angulation, sweeping sidegait, pretty necks, solid toplines, wonderful coats and moderate bone to his progeny. He also passed down full dentition and scissors bites. He and his offspring were very healthy and lived long, active lives.

This story an excerpt from Chapter 15 in Unforgettable Aussies: Australian Shepherd Dogs Who Left Pawprints on Our Hearts by Paula McDermid. To order click on the button below.
Quick link to Dusty's FREE chapter
Quick link to Yukon's FREE chapter
Quick Link to Unforgettable Aussies at Amazon
BACK TO TOP
Site updated 25 January 2022
ALL CONTENT AND PHOTOS IN THIS BLOG ARE PROTECTED BY OFFICIAL COPYRIGHT FROM THE UNITED STATES COPYRIGHT OFFICE.
​Copyright 2022 © All Rights Reserved. Paula McDermid / Bainbridge Press. www.paula-mcdermid.com. Unauthorized use and/or duplication of material on this website is strictly prohibited without express and written permission from this site’s author/owner. Excerpts may be used, provided that full and clear credit is given to Paula McDermid and www.paula-mcdermid.com with a link to the original content.