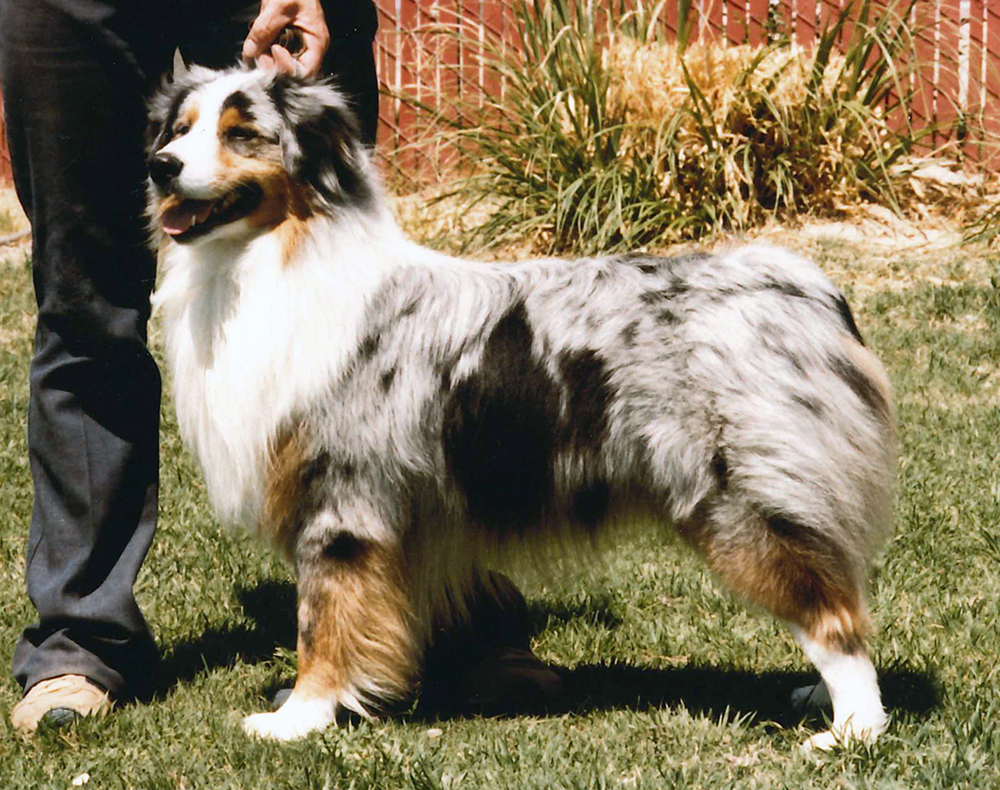 Dude was very popular as a sire and he influenced bloodlines from coast to coast in the United States.
He was an energetic dog with an upbeat attitude, flashy coloring, a beautiful head and cute expression. Although Dude was a smaller-sized dog, in the show ring he had a big presence. He had that “here I am” attitude that couldn’t be missed.

Like many Aussies of that era, Dude’s kids were high-energy, super-smart and able to think independently. Other traits he passed to his offspring were his playful, happy personality and animated show ring presence. Pretty heads and expressions and lots of “chrome” were also Dude’s trademarks.

Dude was a tremendous sire whose legacy continues to the present day.
READ MUCH MORE about Dude in Unforgettable Aussies!

This story an excerpt from Chapter 7 in Unforgettable Aussies: Australian Shepherd Dogs Who Left Pawprints on Our Hearts by Paula McDermid. To order click on the button below.
Quick link to Dusty's FREE chapter
Quick link to Yukon's FREE chapter
Quick Link to Unforgettable Aussies at Amazon
BACK TO TOP
Site updated 01 July 2021
ALL CONTENT AND PHOTOS IN THIS BLOG ARE PROTECTED BY OFFICIAL COPYRIGHT FROM THE UNITED STATES COPYRIGHT OFFICE.
​Copyright 2017-2021 © All Rights Reserved. Paula McDermid / Bainbridge Press. www.paula-mcdermid.com. Unauthorized use and/or duplication of material on this website is strictly prohibited without express and written permission from this site’s author/owner. Excerpts may be used, provided that full and clear credit is given to Paula McDermid and www.paula-mcdermid.com with a link to the original content.