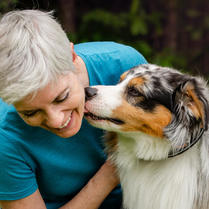 Hi, I'm Paula, the author of the books and e-books on this site. I'm sharing my knowledge to help you achieve your dream of becoming a more successful breeder. I've had lots of success and now it's your turn to have wonderful dogs, enjoy competing at shows and performance events, and become a respected guardian of the breed.

Here's a little about me. I was hooked on Australian Shepherds in 1980 and began training and showing in conformation and performance events. Under my kennel name “Bainbridge,” I produced many champions, obedience, herding, and agility titled dogs, and also trained Aussies in rally and tracking. Bainbridge Aussies became an Australian Shepherd Club of America (ASCA) Hall of Fame kennel.

I started judging Aussies in 1986, and I'm a Senior Breeder Judge for AKC and ASCA shows in the U.S., and a Breeder Judge for FCI shows in Europe. I was an officer of the Aussie clubs where I lived, and also served for nine years on the Board of Directors of the United States Australian Shepherd Association (USASA). My greatest achievement as USASA's Health & Genetics Chairperson was to promote and broaden genetic health testing of Aussies at the National Specialty, and to spearhead one of their epilepsy research programs.

I'm deeply dedicated to Australian Shepherds and hope you'll join me in keeping this breed wonderful!
Photo courtesy of Helene Nilsen Photography.
Site updated 01 January 2023
ALL CONTENT AND PHOTOS IN THIS BLOG ARE PROTECTED BY OFFICIAL COPYRIGHT FROM THE UNITED STATES COPYRIGHT OFFICE.
​Copyright 2023 © All Rights Reserved. Paula McDermid / Bainbridge Press. www.paula-mcdermid.com. Unauthorized use and/or duplication of material on this website is strictly prohibited without express and written permission from this site’s author/owner. Excerpts may be used, provided that full and clear credit is given to Paula McDermid and www.paula-mcdermid.com with a link to the original content.  PRIVACY POLICY