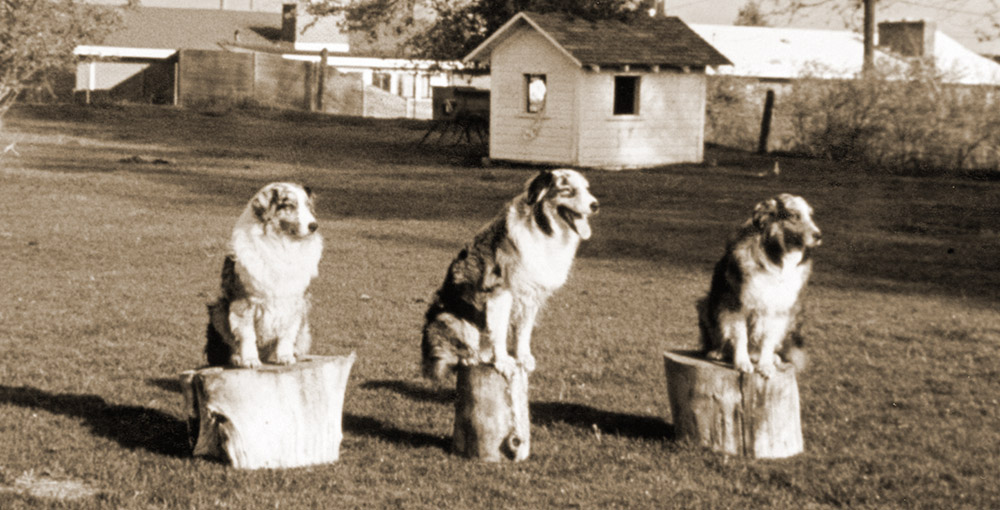 In writing a history of our present line of Australian Shepherds whose names bear a prefix or suffix of Flintridge, I am reminded of a statement made by my old genetics professor in college, who said, “the world is full of collectors, but there are very few breeders.” I also remember the remarks of a group of millionaires when being interviewed. They agreed that their success was the result of many trials and errors and a lot of luck. Whether any of these reflections are pertinent will be decided by the owners and the judges.

Although we have been involved with and interested in Australian Shepherds since 1928, our present family of dogs, as far as we are concerned, is of rather recent vintage. This group of dogs really owes its type and origin to a female whose recorded name is Smedra’s Blue Mistingo. I obtained this female from a client of mine who I had previously advised to “buy an Australian Shepherd.” This lady took my advice but later moved into an apartment and I bought the puppy from her. Although I had several other dogs at the time I saw some characteristics in this dog that I admired very much and felt they were worth perpetuating. I gave her to a friend of mine with the agreement that if she were ever bred I was to receive the choice of the puppies. My friend bred her later to Harper’s Old Smokey and our choice of the litter was the female we called Blue Spice of Flintridge. In my estimation this female possessed nearly all the fine qualities that comprise a great dog of any breed. She was beautiful, she was balanced, she was brilliant—unfortunately she is gone.

We made our first great error when we spayed Spice’s mother after producing this litter. There was also a very impressive male dog in this litter—he is dead now also. Hoping that this quality didn’t all come from the bottom side of this pedigree, we then bred Spice back to her sire and from this litter came several outstanding dogs, two of which have had much influence on the dogs presently bearing our name—Salt of Flintridge and Chili of Flintridge. From here on it was a matter of selection and making those matings that promised superior offspring. How can you tell?

In my mind I have tried to hold that image of what I consider to be the ideal Australian Shepherd. I drew up a 100s grading system embodying the basic ABC’s—ability, beauty, conformation—and walked each individual up against it. Some who are more knowledgeable than I feel that beauty is unimportant, but I am not only vain but feel most people will spend more time looking at their dogs than working with them. It is easy to dream of these goals and pre-plan them on the pedigree blank but they are realized only at the whelping box. Here we adopted methods recommended by the old German Weimaraner breeders.

In their development of the German Weimaraner they selected only the two top puppies from each litter. We have adopted and generally followed this practice in our own breeding program. I was raised with the idea that if your offspring were not as good or better than the parents your breeding program was a failure. This we have tried to maintain as our mental portrait of what we believed was correct. We wanted our dogs to be more than just a good dog but a life-long pleasant experience. If it pleases others, that is gratifying—if not, we feel we have accomplished what we set out to do. We hope it was right.
​
(Signed) Dr. Weldon T. Heard


READ MUCH MORE about the Flintridge Foundation Dogs in Unforgettable Aussies!

This story an excerpt from Unforgettable Aussies: Australian Shepherd Dogs Who Left Pawprints on Our Hearts by Paula McDermid. To order click on the button below.
Quick link to Dusty's FREE chapter
Quick link to Yukon's FREE chapter
Quick Link to Unforgettable Aussies at Amazon
BACK TO TOP
Site updated 12 May 2022
ALL CONTENT AND PHOTOS IN THIS BLOG ARE PROTECTED BY OFFICIAL COPYRIGHT FROM THE UNITED STATES COPYRIGHT OFFICE.
​Copyright 2022 © All Rights Reserved. Paula McDermid / Bainbridge Press. www.paula-mcdermid.com. Unauthorized use and/or duplication of material on this website is strictly prohibited without express and written permission from this site’s author/owner. Excerpts may be used, provided that full and clear credit is given to Paula McDermid and www.paula-mcdermid.com with a link to the original content.